The importance of quality assurance for universities was discussed during a meeting of a member of the Supervisory Board of ELibUkr, Head of the National Agency for Quality Assurance in Higher Education, Serhii Kvit, with representatives of the Kharkov Aviation Institute. 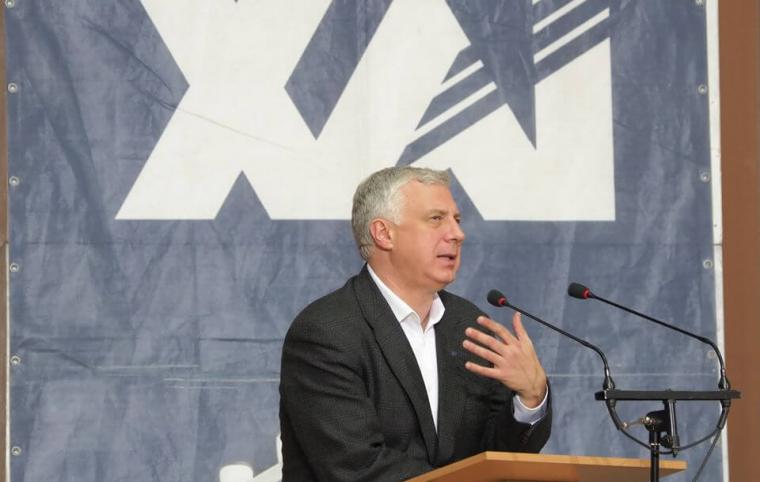 Serhii Kvit - Professor, Former Minister of Education and Science of Ukraine, Member of the Supervisory Board of ELibUkr, President of the National University "Kyiv-Mohyla Academy" (2007-2014), head of the National Agency for Quality Assurance in Higher Education.

The guests were greeted by the rector of KhAI Mykola Nechiporuk, Assistant Rector for Quality Assurance in Education Yuri Vorobyov, Vice-Rector for Administrative and Economic Activities Oleg Bugaenko and other representatives of the Rectorate.

At 13:00 the head of the agency communicated with the heads and pro-rectors of scientific and pedagogical work of ZVO Kharkiv region in the hall of the Academic Council in the main building, and already at 15:00 in the assembly hall he met with guarantors of educational programs of regional institutions for a round table for more a detailed discussion of future actions.

Serhii Kvit emphasized that the agency "focuses on university autonomy", that is, specialists of the state structure, when considering modernizations in the educational process, will first listen to the institutions, and they are ready to cooperate with them in a permanent mode.

“We plan to actively accredit higher education institutions. What really matters to everyone and what needs to be accepted now is the so-called "changing economy" of higher education with the cancellation of the state order. This is when institutions will become business entities. I would also like to point out that there are as many as 1776 units in Ukraine that are decorated differently: legal entity, branch, etc. For example, in Kiev there is a higher education institution, and in one area - its faculty. The divisions are still different. In my opinion, we should have fewer universities, but everyone should be of the highest quality. Not everyone - the best institutions, should be helped,” the head of the agency stressed.

Serhii Kvit spoke about the equal partnership of the National Agency for Quality Assurance in Higher Education with the Ministry of Education and Science of Ukraine, the reduction of paper work (digitization) and the recruitment of new experts to work with Universities in Ukraine. In addition, the speaker noted that the agency would accredit special councils for the defense of PhD and doctoral theses, formulate fundamentally new legislative proposals, and implement the internal system of quality assurance in higher education.

“In Ukraine, after school graduation, 80% of graduates are entering Universities. This is a "fantastic" indicator, and this should never be the case in a rational situation. In Soviet times, as well as in the Europe, there were about 20% of University graduates. The EU now declares 30% of its school graduates becoming students. That is, most of these 80% cannot find a decent job in the job market. I do not want to offend anyone, but for the most part, they are not the kind of people who see their perspective in developing science and higher education. And it is not a duty, ”said Serhii Kvit.

Upon completion of the speech in the assembly hall, the head of the agency visited the motor housing. During the excursion, accompanied by the Dean of the Faculty of Aviation Engines Vladimir Sorokin and the teachers of different departments, he got acquainted with the scientific-production premises.

Read More on the website of the Kharkiv Aviation Institute

ELibUkr: Collaboration for the Future of Ukraine